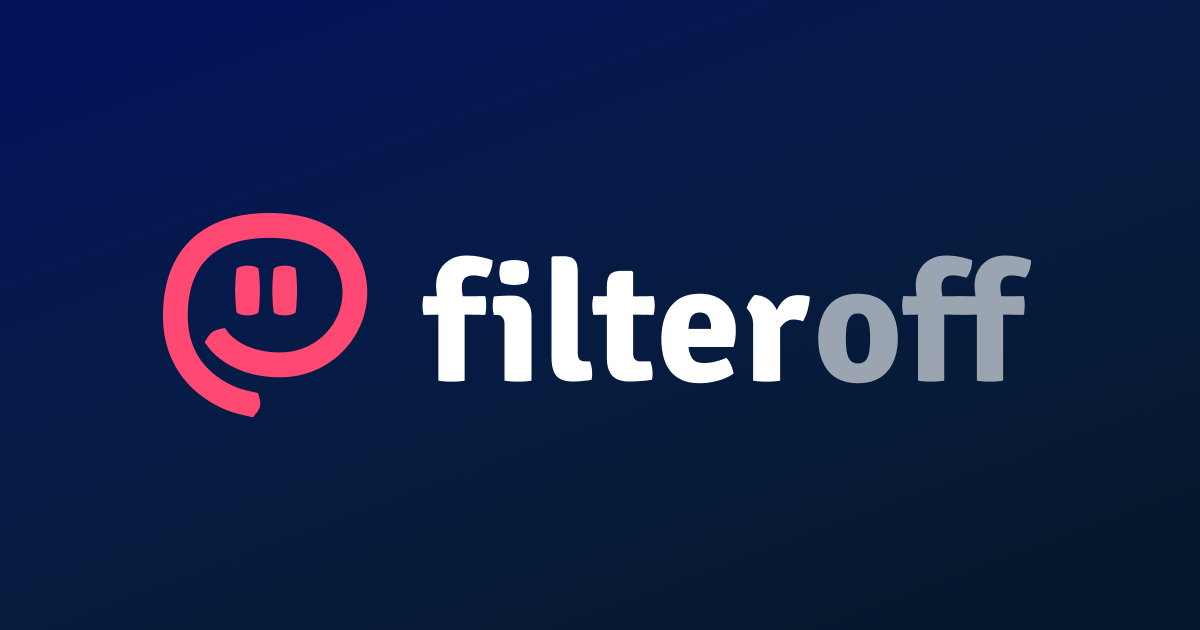 Filteroff has grown tremendously over the pandemic. I created Filteroff because I was sick and tired of going on bad in-person first dates. So before meeting up in person, I started asking my matches if they’d be open to video chatting.

Previously I would have tried to build a connection over text. But I realized I had no text game. When texting it’s really easy to fill in the gaps to make assumptions about what that person is like without hearing and seeing them. Things got lost in translation. I then started asking women if they’d be open to FaceTiming instead.

I felt video chatting would be a low-pressure way to see if we vibed and whether I was attracted before meeting up in-person...and it worked. Video chatting first was so much more efficient. I wasn’t wasting time commuting to meet someone or splurging on over-priced drinks only to quickly discover that we weren’t interested in each other.

I quickly realized it wasn’t just me that longed for deep connection on dating apps. This was something that many singles wanted in the dating community. They just weren’t satisfied with the connections that they were making.

It’s hard for daters to make authentic connections because most apps don’t provide a streamlined way to build trust.

You know how it works -- the endless swiping, the fake profiles, and bad first dates.

I discovered video chatting with my matches first rather than messaging allowed me to get to know the person.

Dating apps that simply add video functionality, are still stuck in the old paradigm. You’re still being judged by your profile. You are still left with the same experience as beforehand. Sure, there’s a video feature but that’s more so an afterthought to the core product.

Think about it when using a swipe app, it’s an inefficient marketing funnel. You first swipe which can take a ton of time until you get a match (especially for men). Then when you have a match you often aren’t even interested in him or her. But if you are and you message them oftentimes they never message you back. Sometimes though it’s your lucky day, your conversation starts strong but then fizzles out in due time. From there, perhaps you exchange numbers or Instagrams. Sometimes though that leads nowhere and they’re just number or Instagram hoarders. But if you really are one of the lucky ones you end up meeting. I think you’re seeing there’s a lot of drop off in this online dating process. That process is way too long.

Filteroff is cutting out 90% of it and just having face to face virtual interactions from the start.

One user emailed me the other day who was a member of one of our religious communities that hosts virtual speed dating events. The “video chat before swiping” premise was everything I wanted in an online dating experience. I used to spend hours on OkCupid and Coffee Meets Bagel texting women, earnestly trying to get to a point where I could see their face and get a feel for their presence, only to feel it wasn’t a match. The effort to evaluate compatibility was demoralizing. In contrast, my first experience on Filteroff ran me through 7 speed video chats in 28 minutes, and it felt amazing! What I experienced in minutes would take me hours on any other app! Of those 7 prospects, two became matches, and one became my girlfriend a few weeks later... And we have been very happy together!

Don’t get me wrong, the swipe was revolutionary in the online dating industry. Prior to dating apps like Tinder, you wouldn’t ever share you met your significant other on a dating app. It was just weird. But apps like Tinder made online dating cool. It normalized the industry. You can literally hop on your iPhone and start chatting with someone from your college campus pretty quickly.

But after 8 years of this we’re still not seeing substantial human connection.

A recent survey of 200,000 iPhone users by Time Well Spent, a nonprofit focused on the digital attention crisis showed that 77 percent of Grindr users felt regret after using the app.

There’s guilt because people don’t like feeling used or using someone. Meaningful connection satisifies a craving that casual sex never will. When you get to know someone at a deeper level it satisfies a feeling of love and belonging. And that’s what today’s intentional dater is looking for.

During the pandemic, Filteroff has quickly realized that video first dating has become the solution to many of these problems. Singles turned to Filteroff to seek out meaningful connection. We at Filteroff facilitated over 230,000 virtual video speed dates attended worldwide during the pandemic with 4 engagements created and 2 marriages formed.

For one, rather than swiping for hours, our users made real face to face connections in their 3 minute virtual speed dates. Secondly, Filteroff is building community. We do that by hosting virtual speed dating events for communities. A community can be anything from a Facebook group like a community of self-proclaimed nerds, to a local religious organization, to a nonprofit.

These communities have used Filteroff to facilitate face to face connection. Not only are individuals making connections, but it makes the group more tight-knit.

The pandemic forced people to adapt and take a leap of faith with video first dating. We’ve all been video chatting on Zoom meetings, FaceTiming with friends and family. So now video chatting with complete strangers on a dating app is no big deal. It’s so much more authentic to connect on video versus text alone.

Post COVID, will people still be video dating? The answer in short is yes. WSJ recently surveyed singles asking the question “Will video dating continue even after the outbreak abates?” And 69% of the survey respondents said they would continue to do so.

The pandemic served as a reminder that the intentional dater is here to stay.